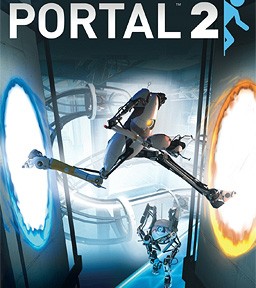 I must say that I am a big fan of Valve games ever since I played Half-Life. I believe, till date, there have been few (if any) game developers who make games as immersive as Valve does. There is a continuous link to each campaign and prequels and sequels fall seamlessly into place. I had bought The Orange Box with the primary intention of playing Half-Life 2. Bundled with it came a new game, Portal, which initially seemed like the additional unwanted games that one usually gets with game bundles. I gleefully ignored it as I set out with my crowbar into the Half-Life 2 world. Several play hours later (that spanned a few real-life days actually) I had completed the Half-Life campaign.

My friends were too busy with Counter-Strike to play a HL2 map with me so I did the next thing any player does. Look for new campaigns or games to play. Looking at my Steam library of games I had only one game left to checkout. Portal, which had come bundled with my purchase, was waiting there for me. I launched the game and threw myself into the campaign. There were no guns or bullets to shoot at enemies. Just puzzles and in your hand was a portal gun.

I don’t remember how long I was playing the game, but I was hooked to Portal from that day onwards. Therefore, it was a no-brainer for me when Valve released Portal 2. I had to have the game. Budget constraints prevented me from buying the game right away, but then after a few months I finally purchased the game. Sure enough I first had to do the campaign. Within 1 day and in 9.5 hours of play time I had completed the Portal 2 campaign. I was more than satisfied. Portal 2 had improved game mechanics compared to the original game. Moreover it had an interesting storyline outlining Aperture’s past with Cave Johnson.

After playing Portal 2’s single player campaign I was quickly attracted to the 2-player co-op mode. The co-op mode added more maps and more fun beyond the single-player campaign with a human partner. But then Valve did not stop there. It added more game value to Portal 2 with community contribution to maps under the Perpetual Testing Initiative (PeTI). Valve tried to make things easier by giving a PeTI editor within the Portal 2 game. I, like countless others, jumped onto the PeTI bandwagon and started playing the Portal 2 maps contributed in the Steam workshop. There are some amazing maps out there, some even going beyond what Valve had incorporated within their own game campaigns. Soon I felt the urge to make my own map. This was not at all a move to prove I could make better maps. In fact I couldn’t. Rather I just wanted to try my hand at mapping. During my college days I had made a CS map using Valve’s Hammer editor. It was a private play map for me and my friends with some glass and props. I never even gave the map a legit name, let alone publish the map on the internet. Fast forward to October 2012. Now I was within the Portal 2 PeTI map editor and as I started I was finding it much easier than Hammer. It was not long after I published my first map and almost completed my second map that I realized, there’s no substitute for Hammer for a good playable map. What follows below is the gist of the maps I have published. If you aren’t interested in reading anymore you can go directly to my Portal 2 steam workshop and subscribe to the maps you may find interesting.

I published my first map, the “Smallest Test Chamber”, just as a test run. To be honest, for the first month I think I was the only subscriber (maybe even got a down rating for the map). Although I was not wishing for popularity my mind’s clockwork was running for the next map.

I did not wait long before starting on my second map. I was pushing the PeTI editor to its limits adding walls, corners and props. My first map was the “Smallest Test Chamber”. This one had to be an opposite, a large test chamber. As I kept adding, I kept play testing and fixing loose ends. I used goo, turrets and lasers for hazards throughout the map. I wanted delayed triggers of tractor beams and discouragement fields (fatal grid of lasers causing instant player death) so I created a hidden room with tractor beams and weighted storage cubes. As I pushed the boundaries of my chambers the stark reality finally hit me. The PeTI editor had its limits. I had a limited map size. I could not make a truly large map. Not just that, with the sheer number of props and items I had added, the PeTI editor refused to compile my map giving an error of “Too many items”. I reluctantly reduced some items to get around this problem. Again, while play testing my map with intentional deaths in mind I had the most fatal realization of all, “Oh noes, no autosave :O !!!”. The player would surely quit the map after the first few deaths, I said to myself. That was it with the PeTI editor for me. Rather than scrapping my progress I decided to adapt to the situation. This map wouldn’t be the largest map, rather it would remain at the maximum limit the PeTI editor had provided. The first obstacle I had provided in my map was the long fall from a height where an almost hidden faithplate saves the player from being killed by the discouragement field. Almost subconsciously I mumbled the words “Leap of faith”. L-I-G-H-T B-U-L-B.. I would call my map “Leap of faithplate”. The next step was to port my map to hammer and start editing. It had been many years since my tryst with hammer so I had to brush my skills again. Most of my time was spent in researching the entities and props used within Portal 2 but I was well on my way to getting what I wanted with the map. Hammer helped greatly to customize the player experience on my maps. Right from hint overlays on the walls and floors throughout the map to larger triggers for catapults so that the player doesn’t miss them during crucial times (like the first fall). I was able to add custom textures, triggers, models and the most important of all these items, autosaves at strategic points across the map. I was getting ready to publish my map when another hiccup occurred. The elevator videos were not loading during my play testing. I was scratching my head for a few hours when my friend Jithin helped me out. He was aware that custom elevator videos were broken after a previous update. He pointed me to Brainstone’s hardcoded instances for elevators. I quickly downloaded the instances and created a test map with them. All seemed to go well, but I soon had a bummer. Maybe I did something wrong because the exit elevator transition wasn’t working well. The player was re-spawning in an endless loop on top of the exit elevator after the initial transition. With just the custom elevator videos stopping me from publishing my map I decided to do away with them completely. After reading various articles I realized Valve updates the map with their own elevator videos after publishing. Okay, so now the last step was remaining, screenshots from within the map. That didn’t take more than 5 minutes. With all pre-requisites complete, I published my map online and told my friends about it.

Whether it is a good or bad map I cannot say as a creator, but I really enjoyed making the map and even though it is not on par with maps created by über mappers out there, I think it’s still turned out pretty good. Hope you’ll enjoy it! 🙂

Easter Egg: Use “sv_cheats 1” and “noclip” and try finding the hidden chamber in the map with 3 tractor beams on the ceiling and my picture on the wall. 😉